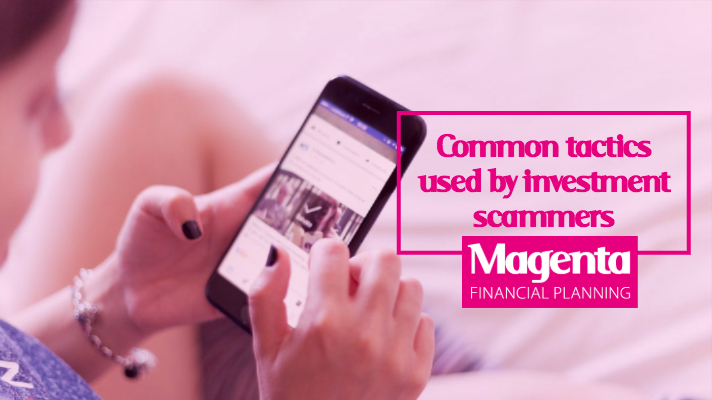 Julie recently met a new client who sadly had lost over £100,000 to a sustained campaign of telephone investment scamming aimed at retired people. This is becoming more worrying as these con artists are using ever more sophisticated and psychological methods to part innocent people from their hard-earned money.

As part of its ScamSmart campaign, the Financial Conduct Authority (FCA) has revealed some of the commonest tactics investment fraudsters use to deceive those they target over the age of 55.

The FCA said one of the most popular methods used by fraudsters is to pressurise potential victims to make a quick decision on the investment ‘opportunity’.

The regulator found more than half (53%) of over-55s believed acting quickly can be essential to obtaining a good deal, which it said demonstrates just how vulnerable people can be to the tactic.

Investment fraud victims do not get off lightly either, losing £32,000 on average, according to figures from Action Fraud released last October.

According to the FCA, the five most common tactics fraudsters use are:

* Offering lucrative returns above the market rate and downplaying the risks of the investment.

* Using flattery to make potential victims feel good, such as praising them for being a knowledgeable investor.

* Saying the deal is only available to the target and asking them to keep it a secret.

* Putting them under pressure to invest in a time-limited offer.

Everyone at Magenta has been approached by scammers at some time and we know how hard it is for ordinary people to identify whether an investment offer is legitimate. They are very clever, playing psychological games to win over the trust of often vulnerable victims.

The FCA has provided 3 tips to help people avoid becoming a victim of investment fraud:

2. Before investing, check the FCA Register to see if the firm or individual you are dealing with is authorised and check the FCA Warning List of firms to avoid

Please remember that no reputable investment companies sell their investments over the telephone so we would like to add another obvious protection technique:

PUT THE ‘PHONE DOWN!