Ten unusual things that affect the value of your home 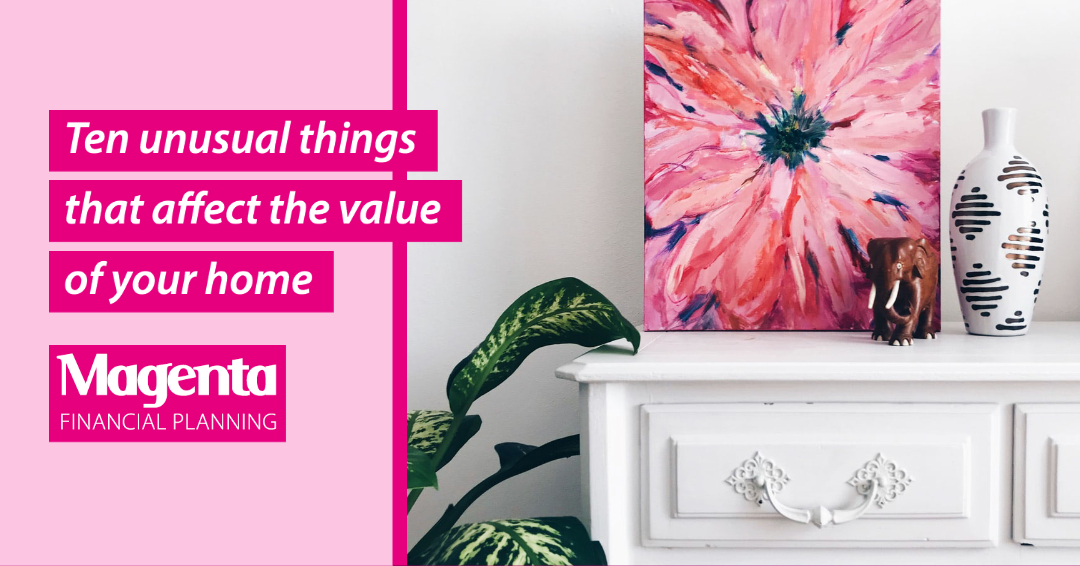 Once lockdown is over you may decide that you want to move house – here are some ways you can boost – or unwittingly reduce – the value of your property.

The latest figures from the Land Registry show that the average house price in the UK is £232,944. While the value of your home is clearly determined by its location and how many rooms you have, your property price can also be affected by a range of more unusual factors.

Here are 10 unexpected things that can affect how much your home is worth.

1. Is it near a supermarket?

If you live near a supermarket, then you may benefit from what has been termed the ‘Waitrose Effect’.

Research from Lloyds Bank has revealed that living near a Waitrose branch can add £36,480 to your property price. If your home is near a Marks & Spencer you can expect a £29,992 uplift in value, while if you live close to a Sainsbury’s you can expect to see your property worth an extra £26,081.

A study by Zoopla found that the name of your street can significantly affect the value of your home. The top five most expensive street names are:

3. How close you are to a bus or Tube stop

Research has shown that the closer you are to public transport, the bigger the impact on your property price.

A Nationwide study found that being within 500m of a London Tube station can increase your property value by 10.5%, although if you are a further 250m away the figure drops to 7.6%.

Living 500 metres or less from a Glasgow railway station adds an average of £9,400 to property values, while in Manchester, living close to a Metrolink station is worth an extra £8,300.

4. Proximity to a good pub

Living near a rowdy bar where drunks spill out onto the pavement every night can have a negative effect on the value of your home.

However, if you live near a lovely local pub which offers excellent food and drink then you can benefit. Surveys have shown that 23% of buyers thought that having a good local was an important part of their decision-making process, while living close to a popular pub can add as much as 10% to the value of your home.

5. How messy your children are

If you’re trying to sell your house, getting your children to tidy away their toys and games could make a significant difference to the value.

ING Direct say that a messy bedroom can knock £8,000 off the value of the average property.

6. Your house number (or name)

We’ve already seen that the name of your street can have an effect on property prices, but more surprising is that numbers can also have an influence.

A Zoopla study revealed that, on average, odd-numbered houses fetched £538 more than even-numbered equivalents. And, if you own a number 13, your home is likely to sell for £6,500 less than its neighbours.

Giving your house a name can also help. Cheltenham and Gloucester found that 88% of people would rather have a house with a name than one with a number, and that houses with names can sell for up to 5% more.

7. Whether you have a canal or river nearby

Living near water not only has a positive effect on your wellbeing, but it can also boost your property price.

According to the Canal and River Trust, property values are boosted by between 15% and 25% if there is water or canal restorations close by.

If you live in a busy town or city centre, being able to park your car outside your home makes it instantly more attractive to potential buyers.

Estimates suggest that a parking space could add as much as £50,000 to the value of a property in an urban location.

If you have children, then you probably already expect to pay a premium for a home that sits in the catchment area of a good school.

A study by Lloyds Bank found that living near a top state secondary school adds an average of £21,000 to house prices. On the flipside, RICS say that a bad Ofsted report takes £20,000 off the cost of the average property

Most of the 39 per cent of people who own a dog or cat in the UK will have no related issues selling their house. However, if your pets are intimidating, smelly or there are just too many of them, that could knock up to five per cent off the asking price.