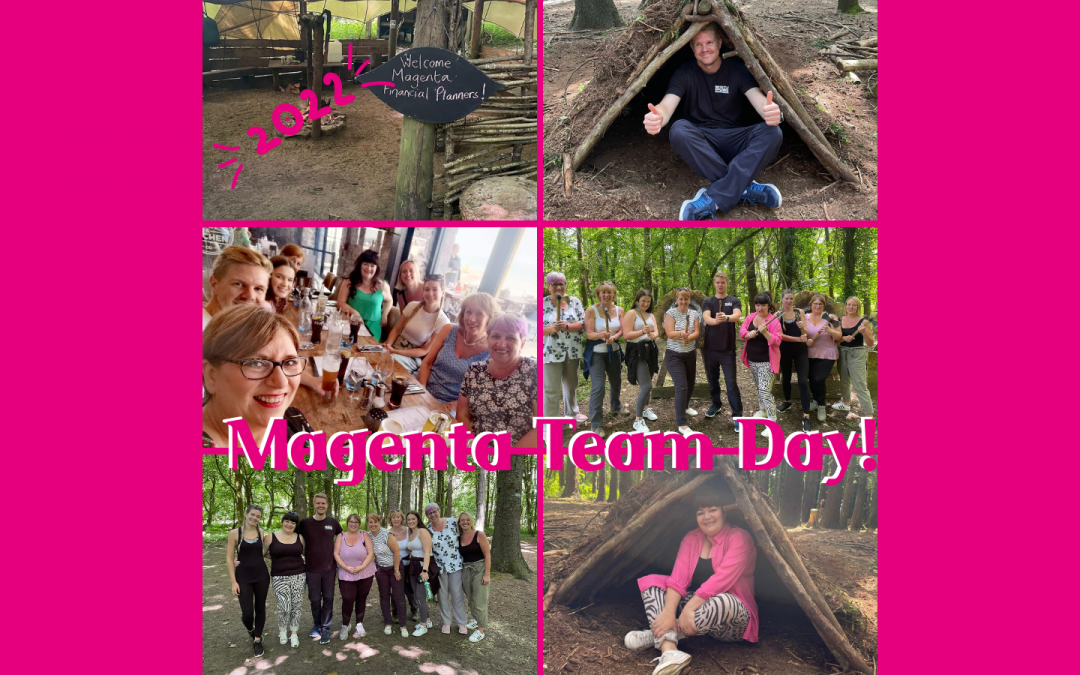 After such a difficult 2 years we really wanted to get the team out of the office for some well-deserved fun and team building.

Finding something that everyone was able or wanted to do wasn’t as easy as it first seemed. We’re a varied team in age and ability!

Roll on a couple of searches and we stumbled on Bush Craft team activities which included axe throwing (yes, I did say axe!), shelter building and learning to light fires.

Our team building day was due to be on one of the hottest days of the month. Armed with clean clothes, drinks and biscuits the Magenta team made their way to the woods.  We were faced with an array of different-sized axes and shown by the instructor how to throw them like a Viking would, whilst as typical financial planners we were thinking “is my life insurance up to date?”

From little baby axes to huge double-sided axes which seemed at first impossible to throw, most of us managed to hit the target at least some of the time. We let our inner Viking out and competed against each other.

Put into teams of three we moved onto shelter building with mud, leaves and sticks and were asked to nominate a team member to climb into our self-built shelters and have the ‘waterproof test’ done! Lots of healthy competition, one badly built shelter,  one well-made shelter and one team who thought they had it in the bag. The winning team managed to keep their “volunteer” (Jess) dry. Jamie however, was left very wet and muddy!

On to fire starting next. Why is being able to start a fire so satisfying?  We were shown how to start a fire using various traditional methods and equipment, using the sun, a flint and two bits of metal striking against each other. The excitement in our voices when one of us managed to get some flames going, you would think we had won a prize!

As a team building day, it was brilliant. We supported each other when we thought we couldn’t do something, encouraged one another in the axe throwing, worked together well as small teams (and became very competitive) in the shelter building and then helped one another in the fire starting. Most of all we laughed and had fun and enjoyed spending some time as a team.

At Magenta we have always believed we provide excellent client service because we have a fantastic team who enjoy working together and the team building day reiterated that. The highlight of the day was Carly, the most nervous of everyone to do the axe throwing, beating myself and Jamie in the final to win the competition. It just goes to show, with support and encouragement you can achieve so much more than you believed you could.