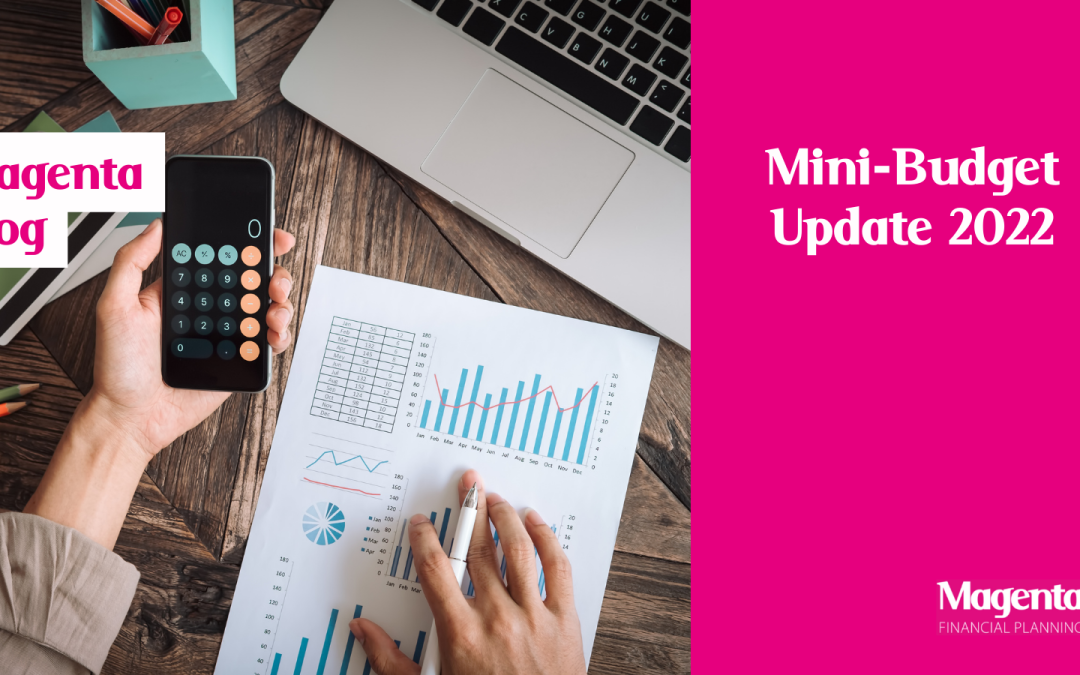 Budget updates used to be every year, but now it seems it can be up to 3 times a year! So here we go again…

In last weeks mini-Budget, the Chancellor announced the government’s Growth Plan 2022 which included a raft of tax reductions and reversals in order to support individuals and businesses in these trying times.

Alongside the recently announced Energy Price Guarantee, the government has committed to a new six-month Energy Bill Relief Scheme for businesses and other non-domestic energy users.

The Growth Plan sets out action to unlock private investment across the whole of the UK, cut red tape to make it quicker to deliver the UK’s critical infrastructure, make work pay, and support people to get onto the property ladder.

The government will also repeal the complex changes to off-payroll working (IR35), allowing businesses to get on with business. Tax simplification will be embedded at the heart of the tax system as a core HM Treasury and HMRC priority, leading to the abolition of the Office of Tax Simplification (OTS).

The main areas of interest to you and Magenta are summarised below:

The 1.25 percentage point rise in National Insurance that took effect from 6 April this year will be reversed from 6 November, for employers as well as individuals. Most employees will receive a cut to their National Insurance directly via payroll in their November pay, with some receiving it in December or January, depending on the complexity of their employer’s payroll software.

Self-employed people and company directors will pay a blended rate of National Insurance – taking into account the changes in rates throughout the year – when they submit their annual self-assessment return.

The 1.25% Health and Social Care Levy that was due to replace the NI increase from April 2023 is being cancelled. Individuals, including those working above State Pension age, and employers will not now be liable to pay the Levy from 6 April 2023.

As part of the cancellation of the Health and Social Care Levy, the Chancellor confirmed that the 1.25 percentage point increases to dividend tax rates introduced from April this year will be scrapped from April 2023. The increased dividend tax was introduced in April 2022 to ensure those who gained income from dividends contributed the same amount to help fund health and social care. Those who pay tax on dividends will save an average of £345 next year.

Apart from the first £2,000 of dividends which are tax free due to the Dividend Allowance, the dividend tax rates will revert in April 2023 to 7.5% (dividends falling in basic rate band), 32.5% higher rate band and 38.1% additional rate band (this highest rate will end alongside the additional 45% tax rate in April 2023).

Companies making between £50,000 and £250,000 would also have faced a rise in Corporation Tax, with the rate increasing incrementally from 19% to 25% depending on how much profit a firm was making. For the remaining 70% of actively trading companies, those who make profits of £50,000 or less, Corporation Tax was to remain at 19%.

The government has now cancelled this planned increase. Rather than rising to 25% from April 2023, the rate will remain at 19% for all firms, regardless of the amount of profit made.

The Annual Investment Allowance threshold has been permanently set at £1 million, rather than reverting to £200,000 in March 2023. This gives 100% tax relief to businesses on their plant and machinery investments up to the higher £1 million limit.

In addition, the government is allowing first-time buyers to access the relief when they buy a property costing less than £625,000 rather than the current £500,000.

These measures will reduce stamp duty bills across the board for all movers by up to £2,500 with first-time buyers able to access up £11,250 in relief and take effect for transactions with effective dates on and after 23 September 2022.

This measure does not apply to Scotland or Wales who operate their own land transactions taxes.

The dividend additional rate will also be removed to align with the dividend upper rate, which is being reduced to 32.5% from 6 April 2023.

Those who would have otherwise been additional rate taxpayers will from April 2023 benefit from a Personal Savings Allowance of £500, in line with higher rate taxpayers. This was not previously available to them.

The government is supporting companies to raise money and attract talent by increasing the generosity and availability of the Seed Enterprise Investment Scheme (SEIS) and Company Share Option Plan (CSOP). The government remains supportive of the Enterprise Investment Scheme (EIS) and Venture Capital Trusts (VCT) and sees the value of extending them in the future. The SEIS investment limit has been doubled to £200,000 from April 2023, while the EIS and VCT schemes have been extended past 2025.

The 2017 and 2021 reforms to the off-payroll working rules (also known as IR35) will be repealed from 6 April 2023. From this date, workers across the UK providing their services via an intermediary, such as a personal service company, will once again be responsible for determining their employment status and paying the appropriate amount of tax and NICs.

As always, if you would like further clarification about how this new legislation will impact your financial planning, call us on 01656 760670.

Please feel free to share this content if you think this could be of interest to someone you know, or your social network, via the buttons below.