I’ve had enough! Guidance for if you are considering Divorce. By Julie Lord. 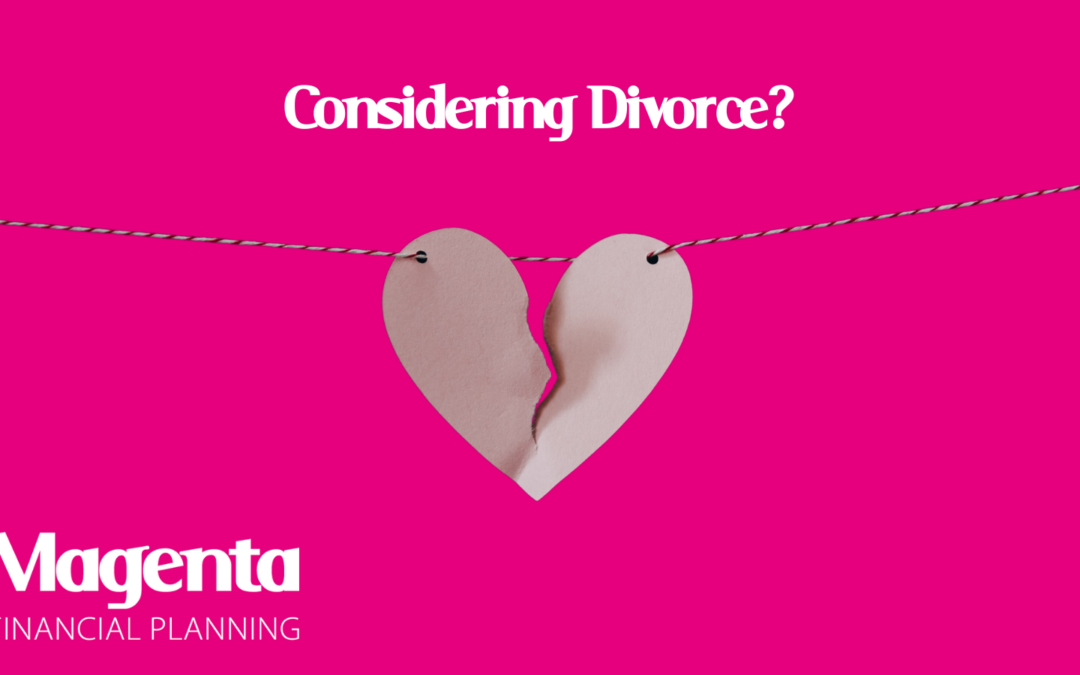 The Christmas break is often a time for reflection and for many people it is the time when they make some of the most important decisions about their future.

The Covid crisis has given people even more time to consider what they really want from life and for many it will mean a future without their current partner.

This is becoming especially true for people who have been married for a long time and may now be moving into a post work/ retirement period which looks distinctly unattractive.

At Magenta we have seen a few long-term marriages and partnerships disintegrate where couples have grown apart or don’t have the same vision of the future anymore. But for most, this turning point in their lives has turned out to be a positive thing, where they can embrace new and exciting opportunities after some short term pain.

The Office of National Statistics tells us that the over 60s is the fastest growing age group of divorcing couples.

They are often referred to as “silver splitters” and the average length of marriage for this group is around 32 years.

The old Prudential advert for retirement planning springs to mind – where the wife was excited to try new things and explore the world after finishing work, while the husband just wanted to rest and watch TV! Sadly, a relationship that was almost certainly doomed without some serious conversations about the future.

Once children have left home, a married person might begin to contemplate what their retirement will consist of with their spouse. The next 30-40 years will loom large and for some, the same old lifestyle with the same old partner may not be what they want. After a period of reflection, there may be a conclusion that greater happiness lies elsewhere.

With ever increasing life expectancy rates and better health care, there is the prospect of new horizons and opportunities which coincide with having more free time.

Interestingly, a divorcing client will often say that they had considered the marriage to be over for some time but had not mustered the energy to make the final decision.

Rarely is the cause of divorce in this age group an adulterous relationship or a catastrophic demonstration of poor behaviour by either party.

The striking feature of such divorces is that they lack the combustible event that more frequently exists when couples divorce at an earlier age.

Without that underlying acrimony it is often the case that silver splitters remain friends with their ex-spouses, having shared such a significant portion of their lives with them.

There is anxiety about loneliness, which party will continue to enjoy friendships previously shared and even where the loyalties of offspring might fall.

In addition, the need to maximise the financial resources of these marriages, causes further anxiety and this is obviously where Magenta can add a lot of value.

If you or someone you know is thinking that they have come to the end of the line with their marriage, there are various sensible steps to take before launching into divorce proceedings.

If a person decides to divorce after a long marriage, it is inevitable that this will be a decision made after lengthy and careful reflection.

In our experience, sometimes, when one party breaks cover about their feelings and intention to divorce, it comes as something of a relief to the other who might not have been brave enough to take that step themselves.

However, the other party may be surprised, disappointed, and immediately negative about the process. The best advice that can be given at this moment is that, if a divorce is going to happen, then it should be managed and not resisted.

The divorce will happen anyway and strong resistance will only unravel the prospects of an amicable outcome and take away the opportunity to cooperate and, furthermore, will add time and expense to the process.

If both parties can come to terms with an imminent separation, then the highest of all the hurdles will have been cleared successfully and the process will become one of finding solutions.

In a long marriage, the liquid assets and property will almost always be divided equally and the matrimonial pot will be calculated by applying valuations to each of the assets.

After a long marriage there are often more assets of a higher value to divide, but also, there are fewer years ahead to generate further assets or income. Consideration must be given to the security and happiness of each party which is why we always compile separate financial cashflow forecasts to alleviate some of the stress and worry associated with divorce.

If we can help a couple reach an amicable financial solution, they are likely to remain at least cordial and maybe even friendly.

Do take a look at our Divorce Toolkit for further information about getting the process right.

Almost certainly for one party this will be a confusing time. Often we meet women who have little experience of managing investments and insurance etc, having left all this to their husband throughout their relationship. All of a sudden, they are thrust into the unknown world of financial planning and need our help to steady the new ship as they sail into unchartered waters on their hopefully, interesting and adventurous new life.

Life is too short to spend our retirement years feeling unfulfilled, resentful and unhappy, but we know that too many people suffer in silence and feel trapped, because they worry that they will not have enough money or courage to make the break with their long term partner.

If this sounds like you or someone you know, do share this and/or contact us for a friendly chat. It is very unlikely that we are unable to help, and we may be able to help open up a whole new world of opportunity, security and joy.